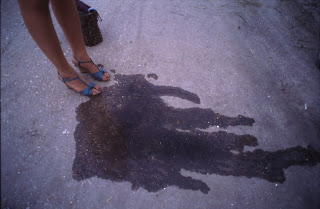 Yeah we had our own HMPL…and Evil Army from Memphis rocked the haus. if you haven’t seen them – it’s like seeing Metallica before they sucked.

Got dem quotes in dat papa

I just shot a myspace secret show this weekend…i’ll be posting shots of Lil Wayne and Mike Jones…i got to have about 1 min. with each of them to shoot portraits…nice.

In the meantime, check out this weekends Antigravity Alternative Media Expo at the CAC, Leo is featured in this weeks Gambit, where i was interviewed also. And that Bally Who shot creeps in again! Go see this band!

from the last time these nuts were in town.

None A Stranger- Slice Pizza

When dining…choose the back room at Slice Pizza, where you’ll be surrounded by some select prints from my recent show, None A Stranger. Eat up, they got the best pie in town.

They are at St. Charles and MLK

I am honored to have been chosen as one of 16 artist from 9 countries in the Inagural BECA Gallery International Art Exhibit: Connections.

This juried group exhibition was curated by Caroline Worthington, Curator of Art, York Museums Trust, York Art Gallery, England. She looks forward to her pioneering position and writes, “As BECA gallery’s first international curator, it seems to me that the theme of connections is an obvious choice to reflect the aspirations for their programme Mrs. Worthington used a bling selection process in her jury selection, and im happy to be included in this one. The image chosen is one of my favorite: The Bally Who?

The longer you do it, the better you get at it. The saying is true for alot of things, and Mardi Gras is right in there. Rotary Downs had two great gigs on Friday and Saturday, and that was enough time to get some rest for the Gras. look here for video of the 7th Annual Not So Super Super Hero Party at the HiHo on Sat.:

Mardi Gras Day – up at 6:30 as Blake, Coogan, Brower, and Christina, Supa Saint, Pumpkin, and others rolled up on two wheel motion to Thalia…and we were off. On our route was a meeting of the minds at Igors, complete with dumbed down and ripped Widespread fans…still there from Halloween 2003? Guess so. Then, 10 of us on bikes rode thru Zulu and met up with my bud Juan and his new tribe, with his son..watched them dress and begin to march.

We parked bikes at Handa Wanda and soaked in suds, CP’s, and pork at The Sportsman, watching Bo, Girard, and Rita Dollis, and Gerald French (nice) mask again as the The Wild Magnolias. Other tribes came by to pay their respects as “The Call us Wild” blasted from Handa Wanda’s speakers. when it came time…the street was blocked by green, gold, and purple feathers, and Indian Red began. There must have been 100 respectful, singing onlookers that day – hearing Girards cry and song to the young, his spy boy, flag boy, wild man, his mom, and his dad “Momma i aint gonna make you cry no more…eeaaa ehhh, eeeh aaaa ehhhh…” We all found out why they call my Indian Red…and then we marched down Oretha Castle. Bo complete in his Rascal, which was good to see..last year he rode on the back of a car. Let’s go get em Bo. The weather couldn’t have been better…we got clouds, sun, clouds, all amidst the cry of the Big Chief and a lineage of pride.

After marching for a while, a few of us split off back down to Thalia at the Bridge Lounge to meet up with the Krewe of Julu – a mixed bag of musicians, artist, bywaters, 9th wards, KlezmersGalactic wildfolks. There we saw “Shotgun Wedding” Lane, Raspberry Sorbet Gillet, The Special Man, The Mailman, and many more. We waited a bit long for the band, and most of the original 2nd/Drayades crew took off…but i stayed. Never haveing done JULU, i had to see it…and moments later – here they came. It was the massive brass band that hangs out on Bourbon/Canal..blowing for tips. I wish i could remember their name. But back at the Bridge Lounge..it was quick..once the tip jar was passed..we were off: running to the house with Sorbet to get her some shoes, i abandoned Britta’s bike and set off on foot…not 100 yards after we started..Henry Griffin led us right under the Magazine over pass and the echo effect took hold, reverberating the bold brass sound right back at you, making you high step higher. All of this happening with no police escort, planned route, or care in the world…we had the street blocking of Bethany the Street Cop, and a meeting with Frenchmen St to give us hope.

We weaved around the CBD, gliding past gawkers, and wide-eyed folks who probably thought “Well, Rex is over, aint’ this the end?”..no sir, it’s only the beginnning…and it’s getting bigger. Stopping traffic left and right, swamp brass echoing off Federal Buildings and rattling glass gallery windows, our song was heard, our cry was answered. Crossing into the end of the CBD we stopped at Chucks bar and gave the solo bartender and his drunk (uncle?) barback a heartattack…200 revelers lining up for the bathroom and beer…and that took a while…but i need some cold drink. So bad, i missed JULU’s departure. Now, if you have ever been separated from a walking parade in downtown NOLA, it’s not as easy as you think to link back up…you THINK it is..that’s why you feel that false sense of confidence…”oh, i know this area..they could only be..” VERY FAR AWAY.

Running after some sort of a sound from our band..my ears started to catch the sounds of a packed Canal St…and the sounds of Zulu. damn, how the hell was i going to cross Canal? It was alot easier back when Zulu was uptown..”ma’am can you please move your cupholder chair and ladder so my 15 biker crew can pass?”..now it was, “Officer, can i” “HELL NO”..this was different turf, and would take different matters…i knew the next stop was One Eyed Jacks…but how the hell was i to get across. But soon after that thought left my right ear, i saw photographer Syndey Byrd and her painted up assistant walking towards me. They were covered in cameras, and random, taped up, twirling press passes from god knows where. I asked her to borrow a pass, found the next cop, and let her do the talking…we were across in 5 min., and i forgot what paper i worked for as i cross 1/2 of the widest street in America. I handed my pass back to Syndey and was off to Jacks…

Apparently I had just missed the Krewe of Pals – complete with 16 member band led by master artist Miranda Lake and some other pals..pals. But Toulouse St. was packed with familiar faces: The Almond Thief, The Special Man…so JULU must be close. And they were…walking into the bar with the band, their presence was met with wild laughter and shouts – echoing once again off the red velvet brick-a-brack, and velvet breasted beauties of the front bar. They linedup on the small steps, turned towards the street, and let it loose. The place went nuts. People on the bar, railings, chairs, mouths yelling, mouths in mouths, hands raised, this is why we live here..there are no rules on Mardi Gras, there are only moments. Just another chapter in your shared collection of Underwater Anarchy.

Reconvening with Almond, Raspberry Gillet, The Mailman (who apparently fixed the saxaphonist axe on the route, nice work). We broke out the CP again, and moved on thru the quarter as we passed revelers, families, drag queens, hanging balcony’s, hanging body parts, screams, and that brass echo; tinged by century’s old wrought iron and cobblestones. The sound was the same as the underpass, the federal building, and the warehouses..but the echo was different. We were different, and the echo fueled the future steps of this mad crew still below the clouds, sun, clouds. 70º. Can this be real?

As we snaked through the Marigny, costumes melded and twistedly joined folks desire to come along. Our crew grew, our destination approaching, our sound frieghtening as the tiny Marigny shot the brass sound up to the heavens. As we rounded Royal onto Frenchmen, the streets parted as folks not able to catch the sidewalk jumped high to car and truck roof tops, beds, and hoods clapping and waving and hurling and shouting. So Far Behind We’re Ahead. I’ll Sleep When I’m Dead.

On the streets, the original Thalia crew tightened, convened, re-convened and more reveling was complete. Was DBA ready for us? aFter all we’d been through? I realized this was only my story…what other adventures awaited my ears as Pimp Haney began his Humid Haney Rant? Who were those indian women in their furry boots? They smiled. Perrine, Debbie, Rockstars…and others..all ready to throw down again, and higher.

Was DBA ready? Tom? You sure?…they were…not soon after our entrance, our hosts for the evening took the stage, The New Orleans Klezmer All-Stars acted as the glue to our large scattered puzzles, pulling us together on the dancefloor by way of Balkan, Klezmer fantasy’s as the wild frenetic wails scattered the brass echoes of the early day.

Not So Super Super Hero Party

Yep, it’s back..for the 7th year, and Rotary Downs is playing it’s 2nd in row…from the humble beginnings in a Sophie B Wright Apt, to my backyard, and now to a REAL venue with liquor and a sound system..things are expecting to get nuts.

not to be missed.. must be costumed.