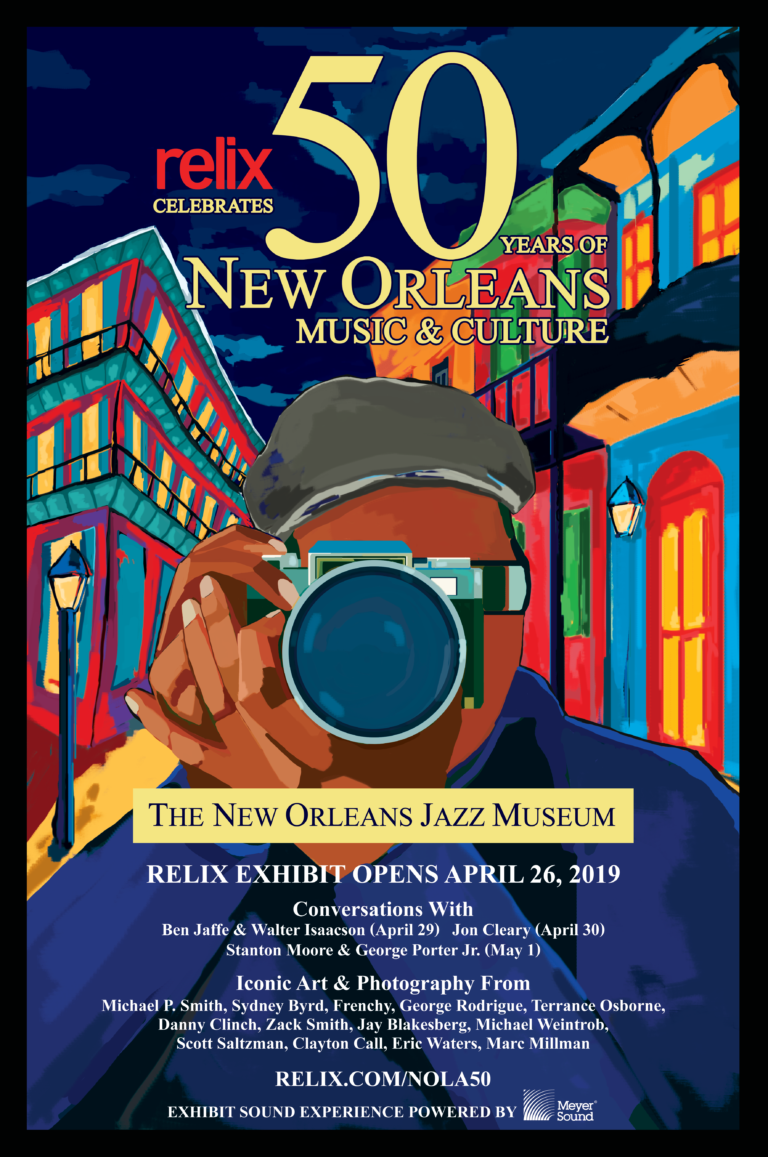 I am honored to have seven photographs in this unique museum exhibit celebrating “50 years of New Orleans Music and Culture” as Jazz Fest turns 50. Starting in the early 2000’s I enjoyed a wonderful relationship with Relix Magazine and most notably Jambase.com, as they provided a wide outlet to showcase my early editorial photography. My New Orleans photography was able to be featured in both magazines as I was getting my start in the city documenting just about everything. I covered Jazz Fest for Jambase.com from around 2004-2008, and soon after was offered a staff photography position by Jazz Fest in 2009. From 2009-2016 I photographed Jazz Fest with a creative reckless abandon both night and day, going through rolls of film and digital cameras day in day out. As a New Orleans photographer I made precious contacts and kindled long term relationships with so many wonderful people and culture bearers that I keep to this date.

Here’s the press release from Relix.com

This year’s New Orleans Jazz & Heritage Festival will mark the 50th annual iteration of the legendary gathering, and Relix is heading down to Crescent City for a celebration of all things Jazz Fest. Our “50 Years of New Orleans Music & Culture” exhibit at The New Orleans Jazz Museum will feature art and photography from an array of NOLA staples and will host a series of special conversations and events featuring some of our favorite New Orleans-based musicians.

The exhibit will open on April 26, the first Friday of Jazz Fest, and remain at the museum throughout May. The afternoon conversations will kick off on Monday, April 29, with a chat on New Orleans history and music with Preservation Hall Jazz Band’s Ben Jaffe, who also serves as the Creative Director for the band’s namesake building, and writer Walter Isaacson, professor of history at Tulane University and former Chairman/CEO of CNN and Managing Editor of Time Magazine. The following day will feature a presentation from renowned keyboardist/singer-songwriter and longtime New Orleans transplant Jon Cleary, who will offer a musical trip through the history of piano in New Orleans. The series will then wrap up on May 1 with a conversation between two funk icons, Galactic drummer Stanton Moore and legendary Meters bassist George Porter Jr. Relix editors Dean Budnick and Mike Greenhaus will serve as moderators at the events.

Included in the Jazz Museum exhibit will be art and photography from the likes of Michael P. Smith, Sydney Byrd, Danny Clinch, Frenchy, Eric Waters, Clayton Call, Jay Blakesberg, Zack Smith, Scott Saltzman, Dino Perrucci, Marc Millman and Michael Weintrob, along with memorabilia from past Jazz Fests, including a chronological presentation of every official poster from the festival’s five decades.

Relix will also be hosting nighttime events at the museum during Jazz Fest featuring live interviews and panels with iconic members of the New Orleans music and Jazz Fest scene—followed by intimate performances—along with local chefs and mixologists helping to highlight the legendary food and drink culture of the Big Easy.